Considering the state of the weather we had a brilliant turnout for this outing, all credit to those hardy souls that made the effort. We still managed a few no-shows though, courtesy of  the “if it’s grey, we don’t play” brigade, hard lines you missed a good one. Great route by all accounts together with a lovely lunch stop at Irlam Station.

The group gathered in the pouring rain at Trencherfield and it was immediately obvious that the weather had put a few people off as we had about half a dozen who had reneged on the ride. Pete who was leading the ride was up for the challenge so our intrepid group of 11 set off (may need him to lead the Waddington ride if it’s raining that day). We climbed up to Three Sisters where Pauline had a problem with her saddle but Pete adjusted it and she was able to carry on with no further problems. We then made our way to Golborne crossing Haydock Park Racecourse to meet up with Richie at the East Lanc’s Road. We continued through Newton-Le- Willows to Wargrave where we picked up the Sankey Valley Trail. It brought back memories for Roy as he served his apprenticeship at the Vulcan Engineering Works, but it’s now long gone (the works that is – not Roy’s memory!). We continued onwards to Warrington and Birchwood then passing through Risley Moss on our way to Glazebrook. It was still raining persistently and most people were wet through when we reached our lunch stop at Irlam Station.

We had a lovely lunch and hot drink and the staff were really friendly and helpful. We had told them in advance about our visit and they had set tables aside for us. The station has a 1920’s theme and provided a really pleasant atmosphere for lunch. We had dried off and were all ready to go when Paula couldn’t resist temptation any longer and decided to have a piece of cake, obviously we all sat watching her as she scoffed the lot, crumbs n’all !!!

As we set off on the second half of the ride the rain had stopped and it began to brighten up. Ray almost came a cropper as he got his front wheel stuck in a rut and nearly came off. The latter part of the route along the Leeds-Liverpool Canal towpath was a really pleasant ride. We were close to Pennington Flash when we spotted two Canada Geese with a gosling that was stuck on its back and clearly struggling, a bit like on a night out when you’ve had too much alcohol and can’t stand up no matter how hard you try. We stopped while Tracy and Les turned the young bird back onto its feet, ignoring the vocal concern from the hissing parents while doing so, not suggesting for one minute that Tracy felt any empathy with it, or for that matter has ever been in that condition herself, heaven forbid. Let’s just hope the little thing survived (the Gosling that is). As we neared the end of the ride we were once again caught up in a slight rain shower, now if Paula had eaten her cake just that little bit quicker, we just might have all stayed dry!!

Despite the weather it was a really enjoyable ride that we should repeat again on a better day. This would be an ideal ride for newcomers who wanted to test themselves on a longish ride, as the route is mostly flat.

Big thank you to Pete for leading (despite the weather),Tracy and Les for back marking and their good deed with the baby Gosling, Steve for volunteering to be our roving cameraman, Roy & Co for doing a cracking job putting the ride into words for us, finally to everyone that braved the conditions and made the ride a huge success. 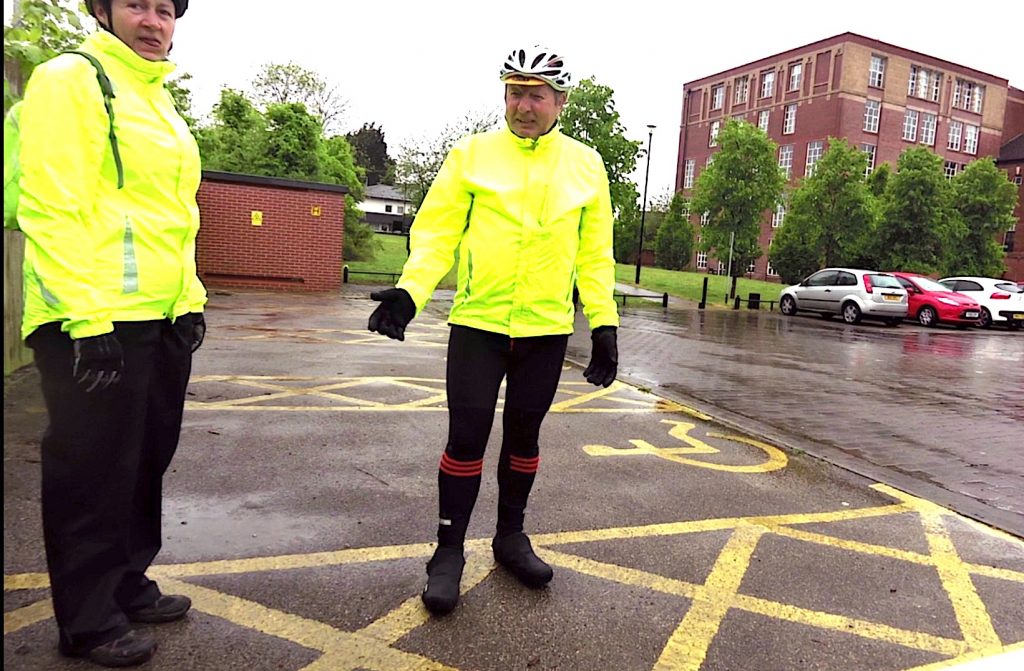 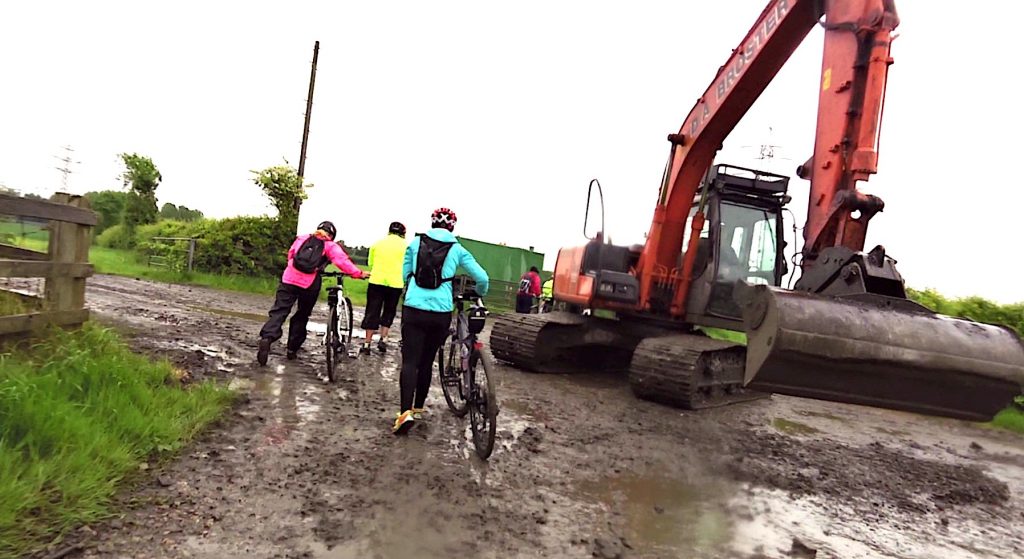 At least it’s not dusty! 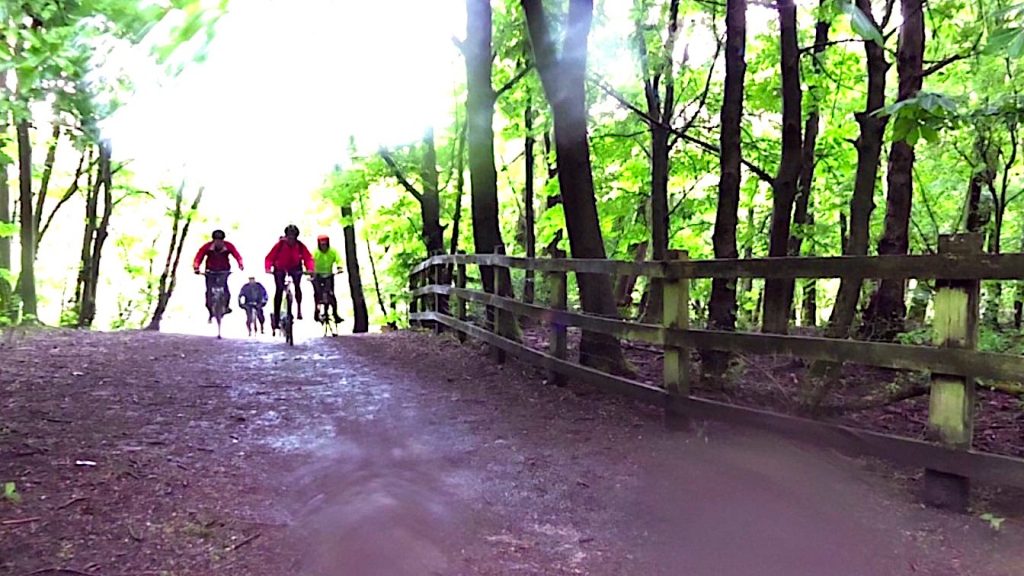 The creatures from the blue lagoon! 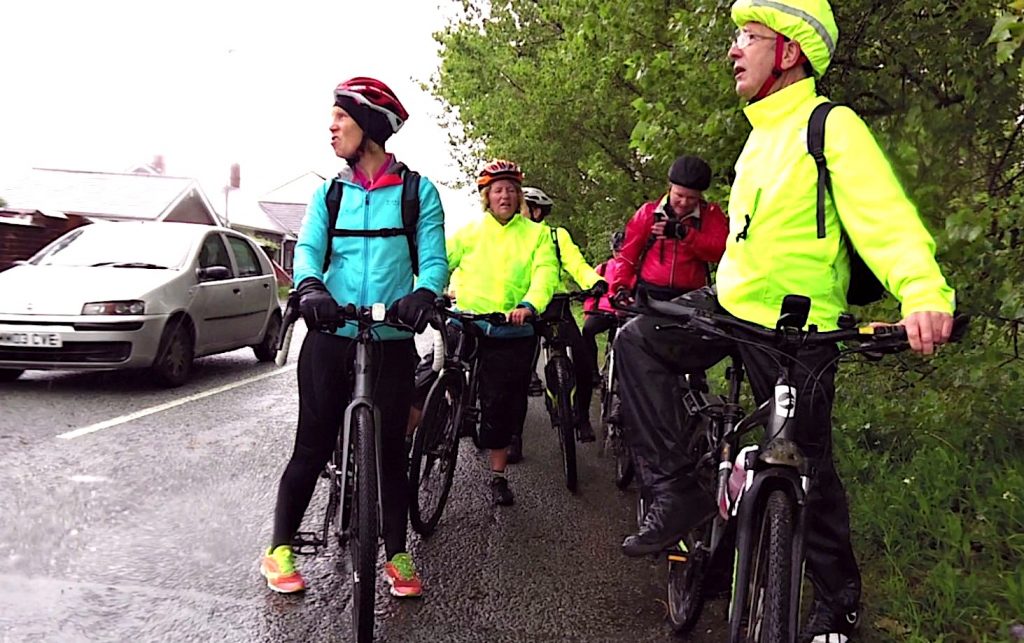 Well be honest Pauline, what do you really think of the weather! 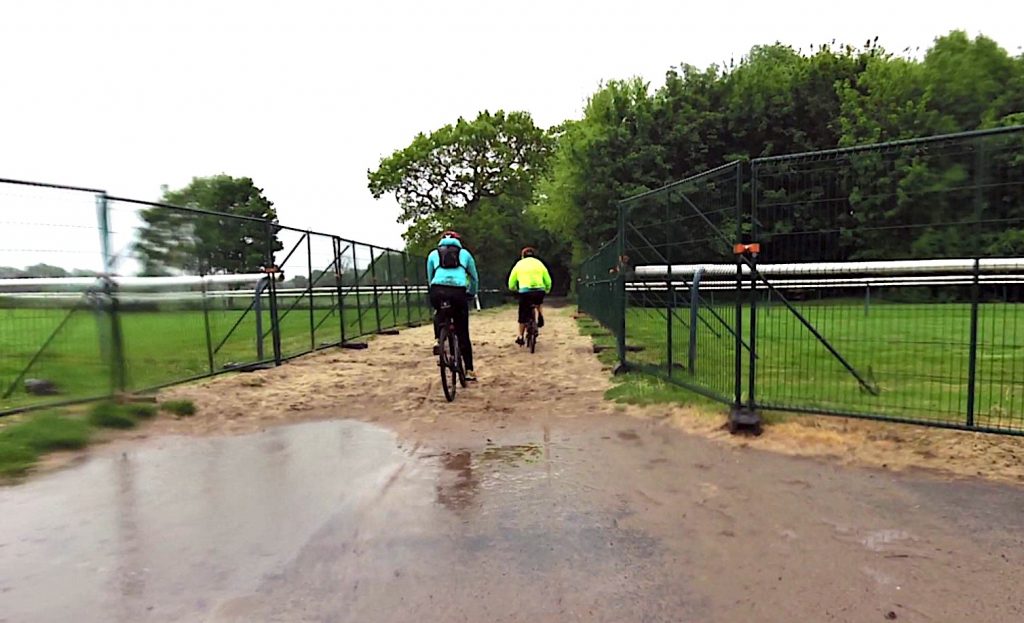 Think today’s going would be described as heavy, very heavy! 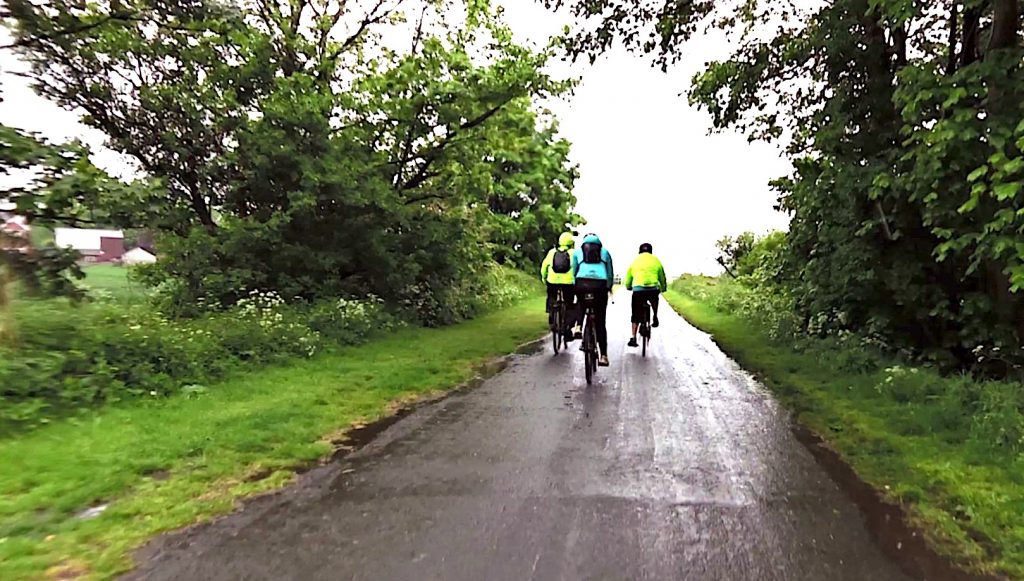 At least the roads are quiet! 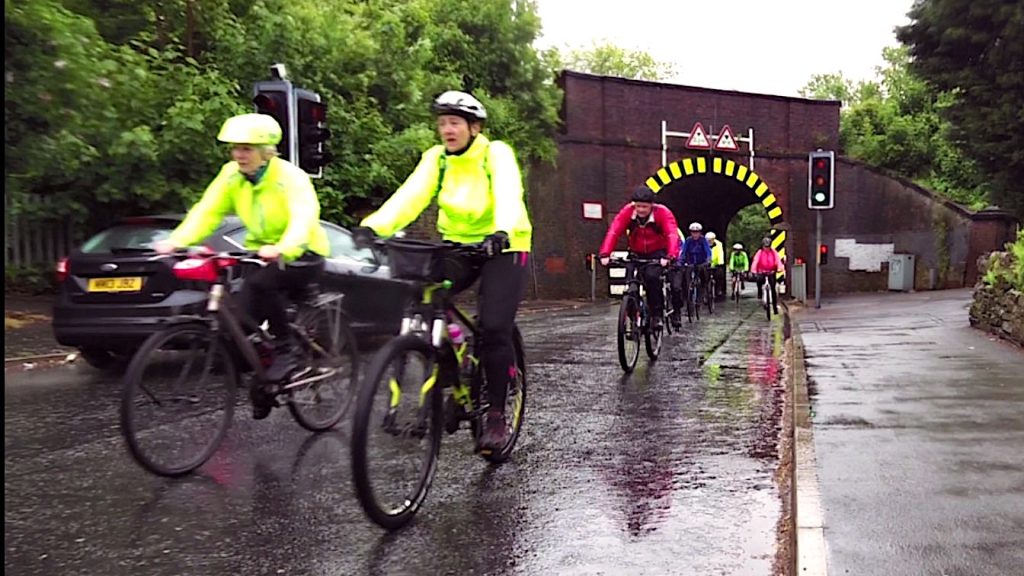 Joyce has got the right idea, she’s wearing an upturned dinghy on her head! 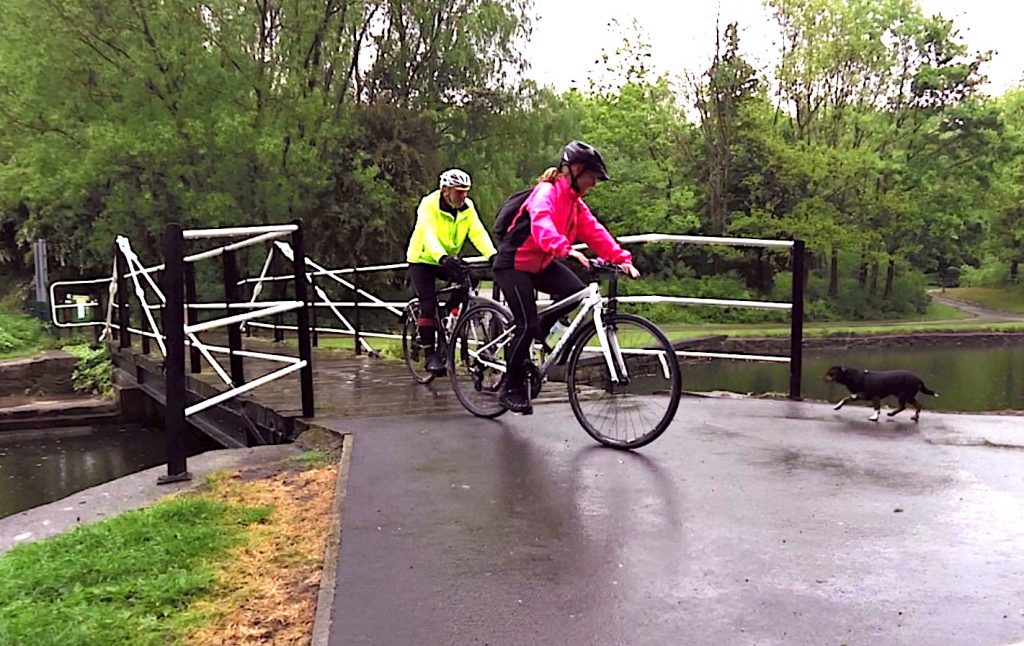 Look it’s one of those little yappy things, and a small dog! 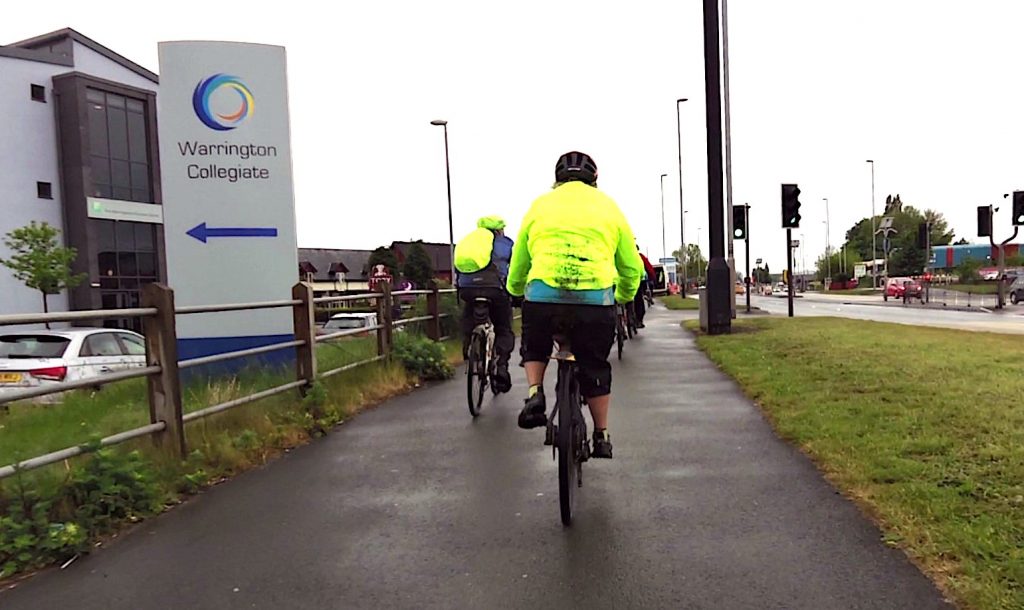 Wonder if Thelma nipped in to do a bit of marking! 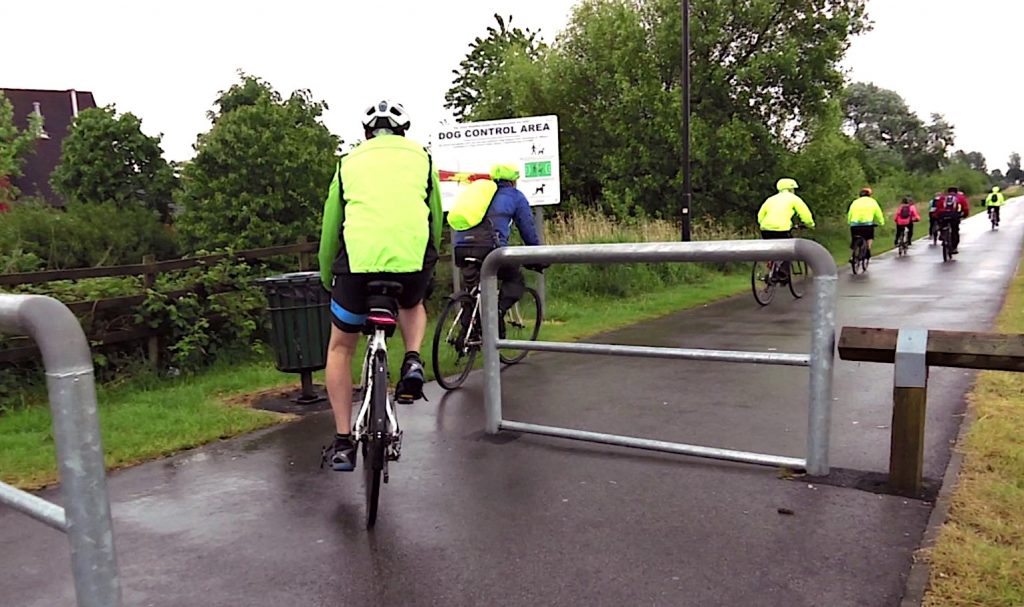 Dog control area, if only dogs could read! 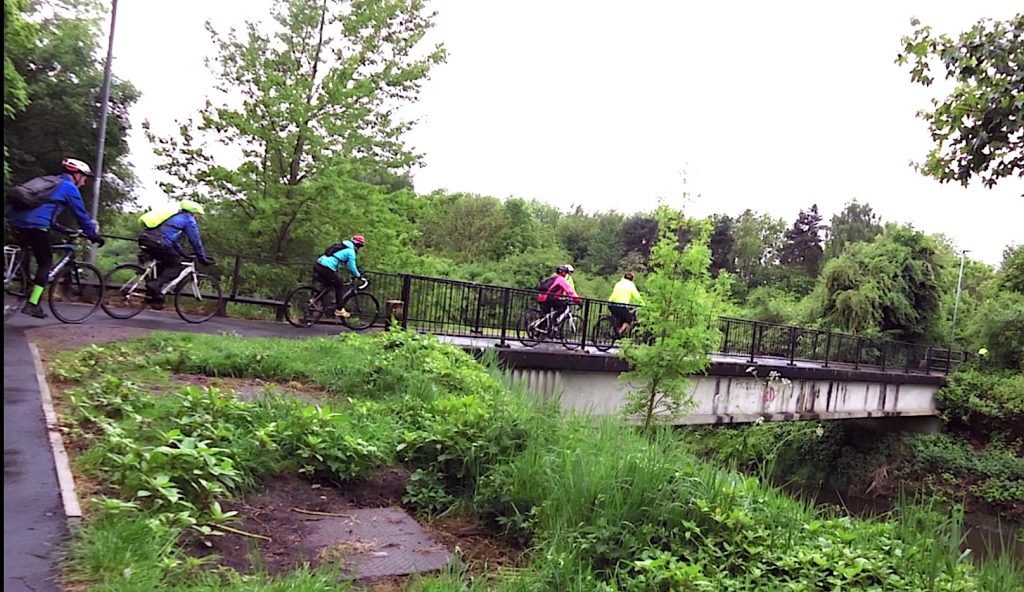 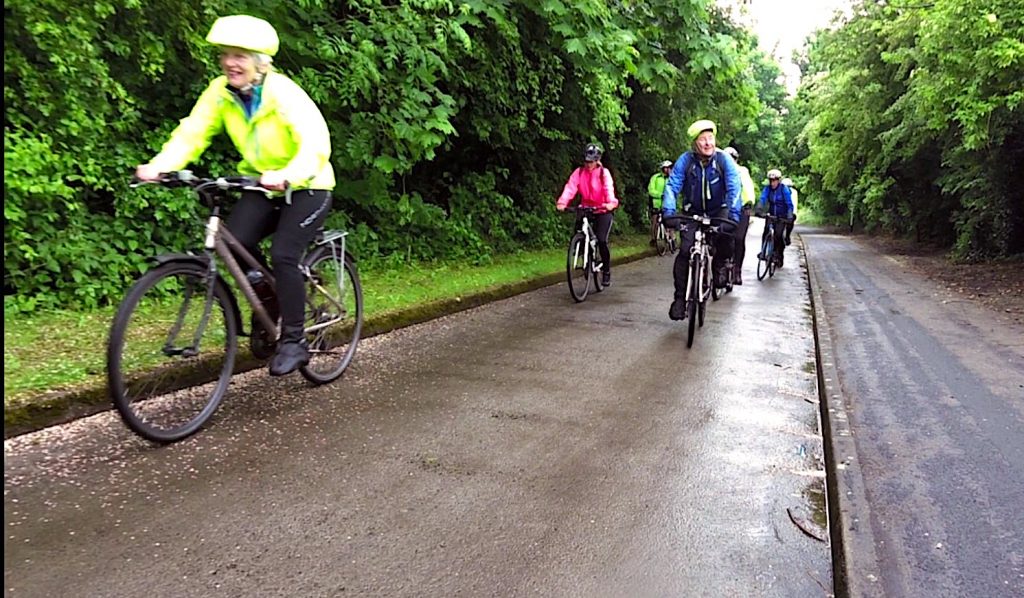 Now if you’d thought on, you could have all sheltered under Joyce’s hat, plenty room for everyone! 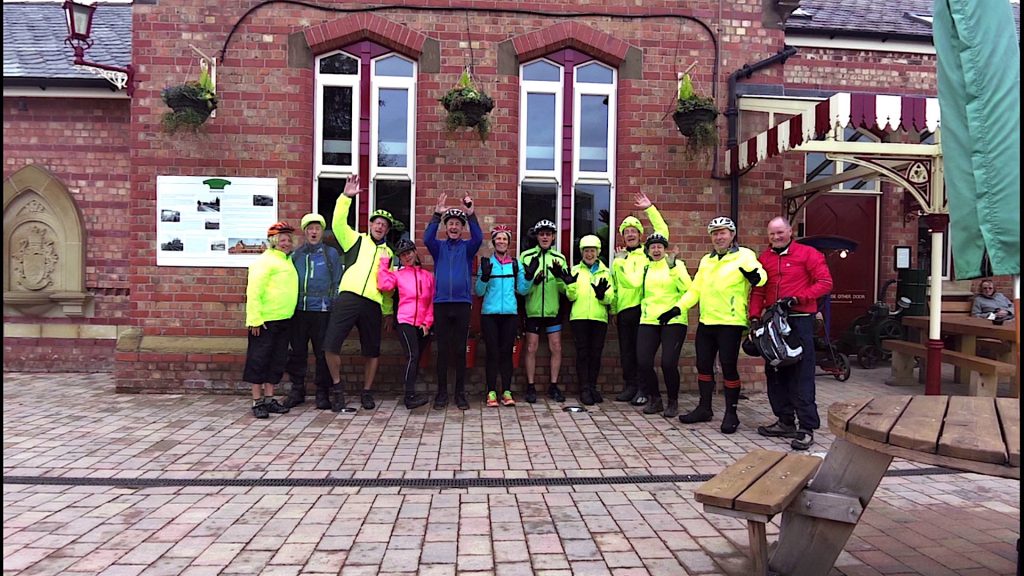 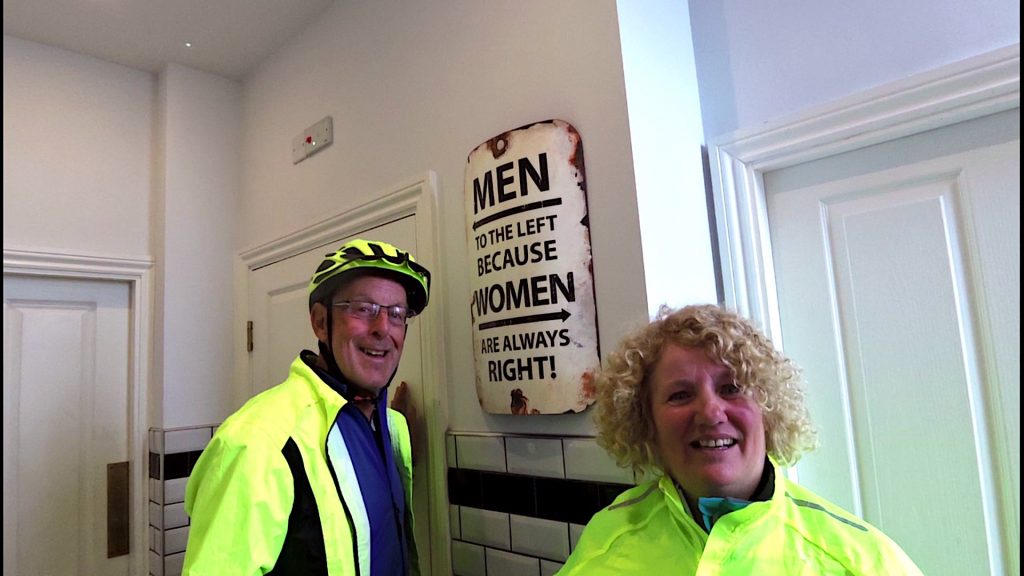 Even when they’re not! 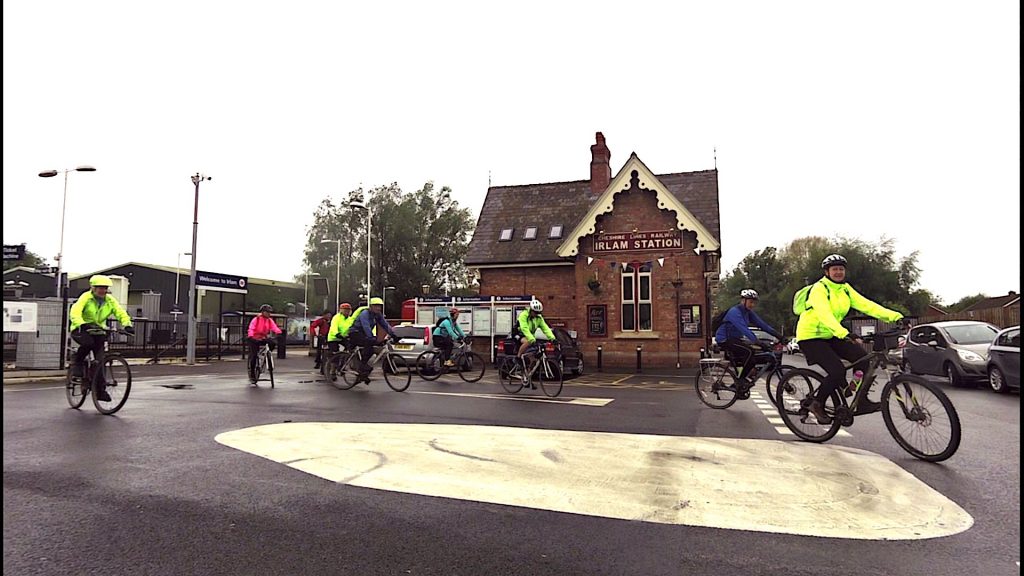 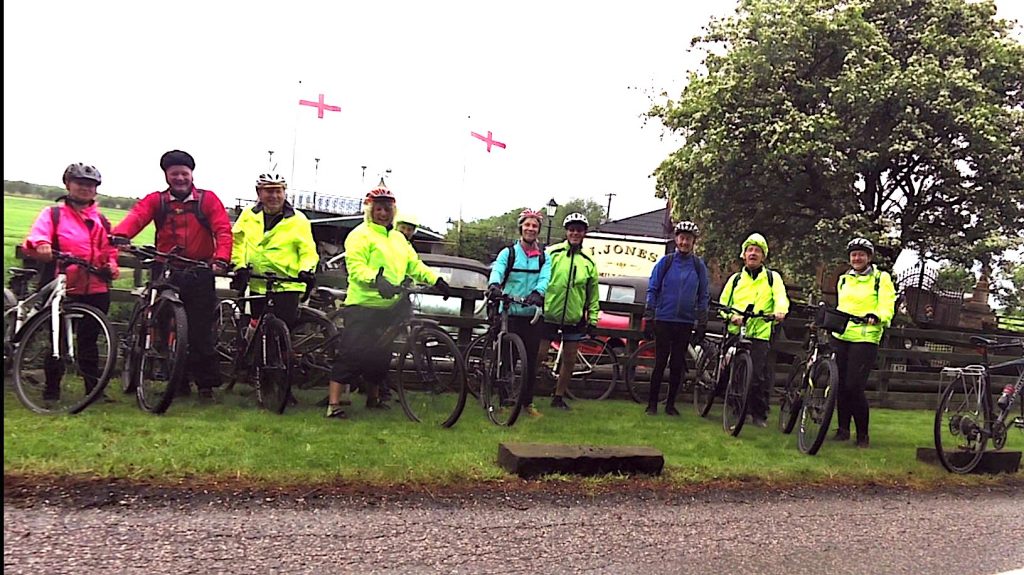 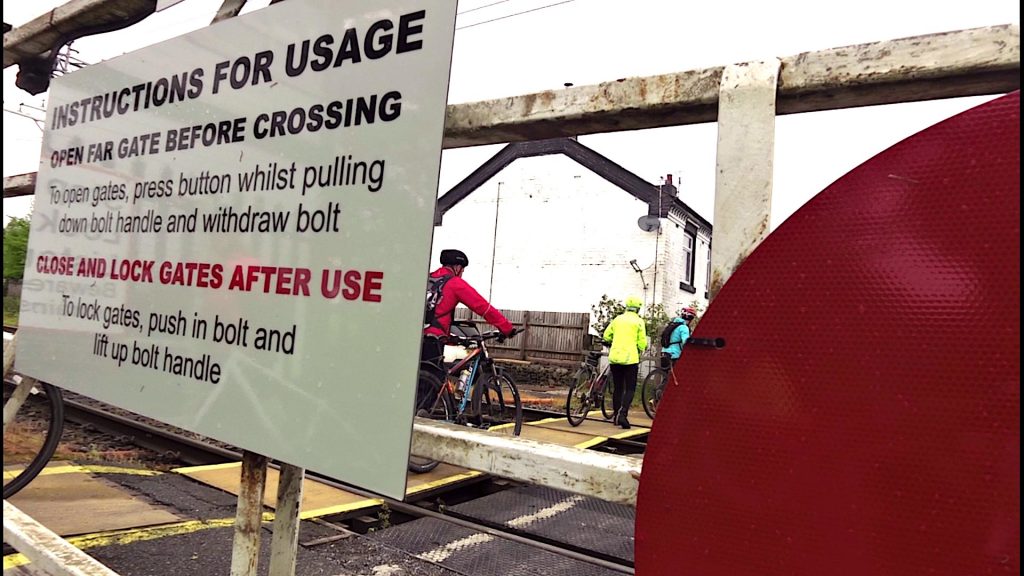 Now that doesn’t seem complicated at all! 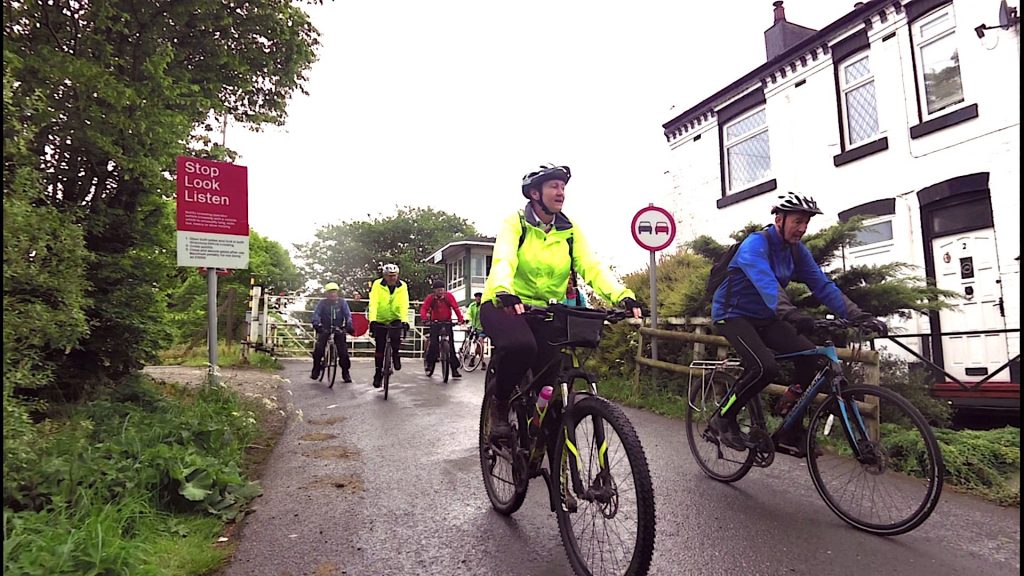 Toilet scenario all over again, blacks cars to the left because red are always right! 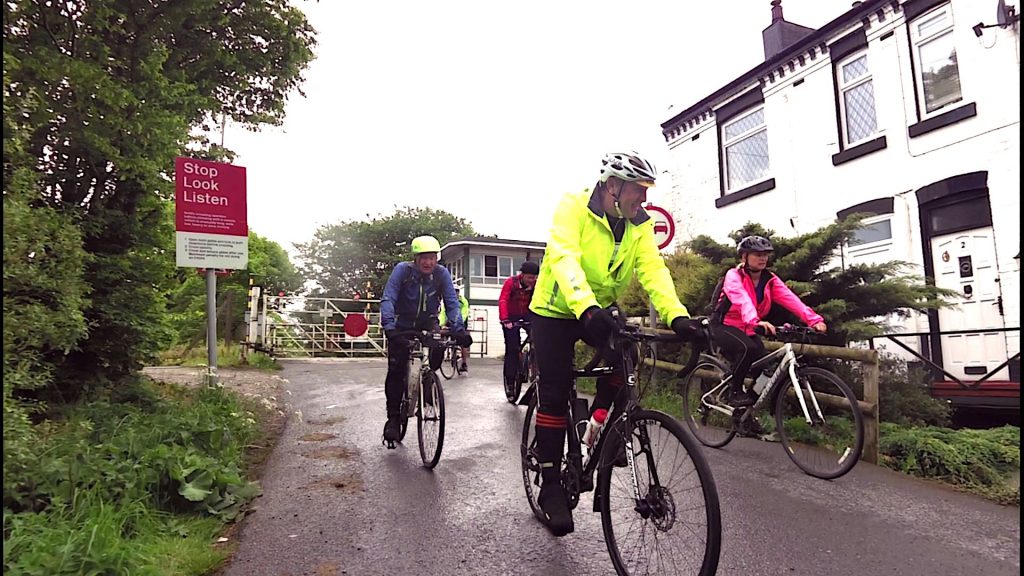 Bet none of you stopped, looked or listened! 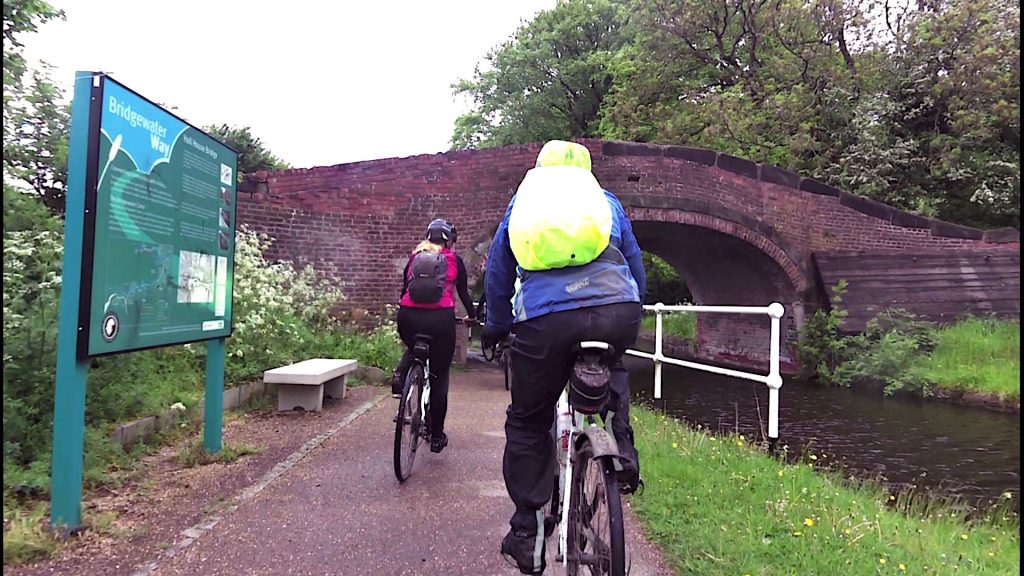 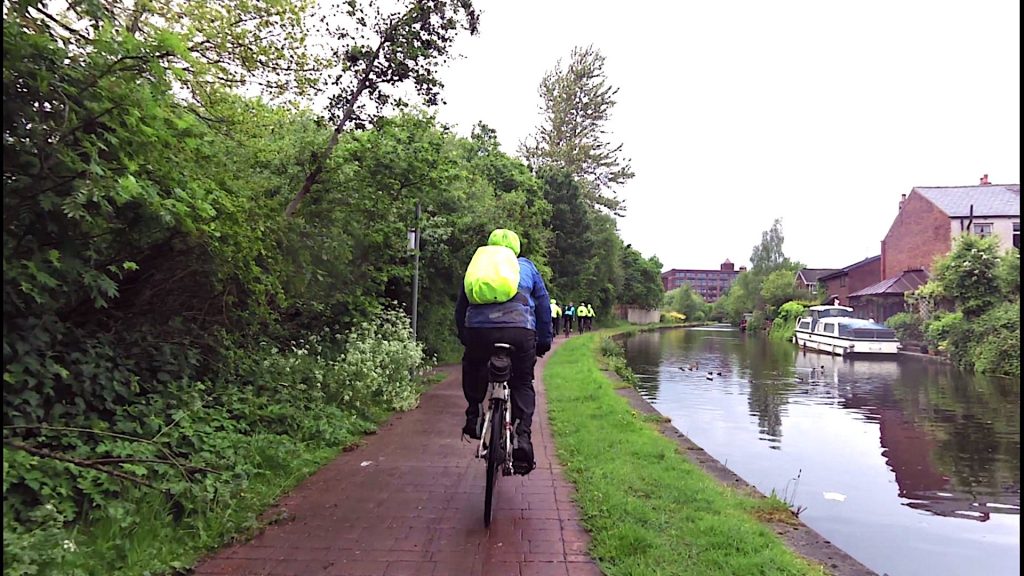 No not Leigh, next town along! 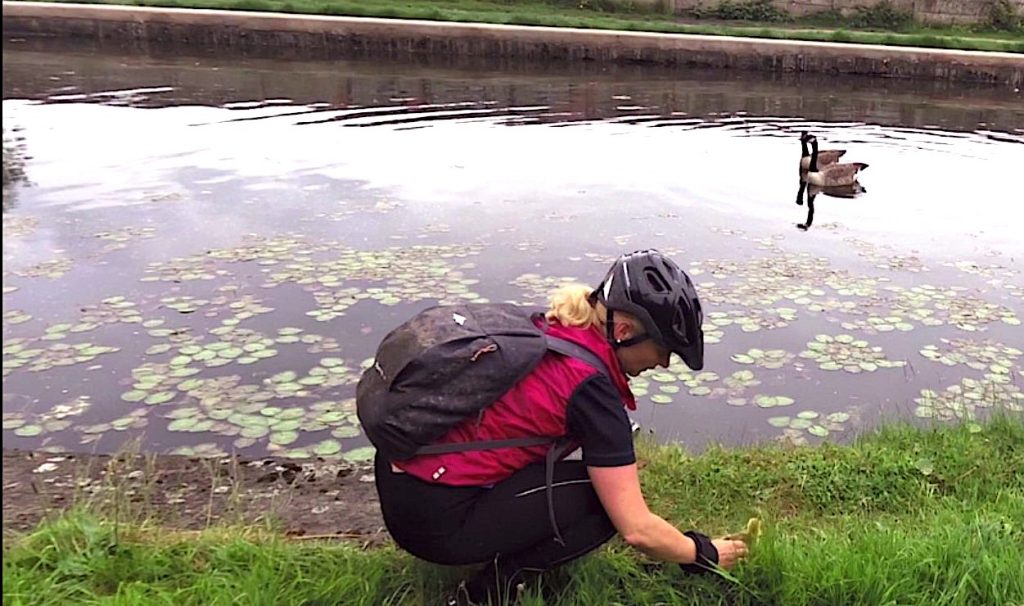